The march of bicycle science (with correction)

When I first started a blog in 2014, my first post was an analysis of bicycle research from Web of Science. With this weekend’s March for Science, I thought I would take another, updated look.

My Methods (a function of the time I had to spend)

When I did it the first time, I limited the categories to transportation, urban studies, and closely related topics. This excluded much of the research in public health. The problem is that the word bicycle and derivations of it are used in medical research to describe physiological processes unrelated to the two-wheeled mode of transportation I’m interested in. After digging around a bit, I found a better set of categories that appear to capture a lot the public health research I wanted, without most of the unrelated stuff. It’s still not perfect. I captured any article in my category list with bicycle, bicycling, or bicyclist in the abstract. That did get a few things that were not about bicycling, but bicycle was in the abstract, for example an article about vaccinations in Zambia that used bicycle ownership as a measure of wealth. But, with about 3,000 records, I wasn’t going to read every abstract to weed them out. In addition, there are several articles that focused on multiple travel modes, including bicycling. In these cases, since bicycling was included in the abstract, there are likely findings relevant to the mode, so these should be included. I did not include some engineering categories, that would capture research on the mechanics of the bicycle, but might also capture really unrelated research. I’m also likely missing some of the other social science work.

Key points on my search:

I ended up with 2,935 articles (including book chapters and published proceedings). The first one was published in 1937, an article in Econometrica by Derksen and Rombouts titled “The Demand for Bicycles in the Netherlands.” Imagine my delight when I found the article on-line in JSTOR. The authors show a steady increase in bicycle purchases from 1899 to 1936, when there were 397 bicycles per 1,000 population, and pose the question of when saturation might occur. They do not predict when, but guess that 550 bicycles per 1,000 people is the saturation point, based on data from Denmark. A quick internet search indicates that there are now probably close to 1,000 bikes per 1,000 people in the country, or maybe more. The next article appeared in 1952 in the journal Social Forces; “The Sociology of the Bicycle” by Aronson documented the bike boom that started in 1879 and concluded with this:

Thus it can be concluded that the bicycle provided a preview on a miniature scale of much of the social phenomena which the automobile enlarged upon. Of course, the automobile, for the most part, displaced the bicycle as a means of transportation, but made full use of the institutions which accompanied the two-wheeled vehicle. At any rate, an early cyclist hardly realized how right he was when he said, with the bicycle in mind, “Walking is now on its last legs.”

No, I did not proceed to find every article. Instead, here’s what I found from the bibliometric data available from Web of Science.

There is a boom in bicycle research…

The number of articles per year is shown in the figure below. Again, this is not a comprehensive inventory, since it’s based on Web of Science; there were certainly more articles in those early years (e.g. those cited by Aronson, 1952). But, the boom in published research, starting in the 2000s is notable.

…but it’s not just because bicycles are now cool.

While there were well over 300 unique journals publishing this work, over 25% of the articles were published in just two: Transportation Research Record (TRR) and Accident Analysis and Prevention (AAP). TRR is the peer-reviewed journal that publishes papers presented at the Annual Meeting of the Transportation Research Board. This share isn’t very different from the other transportation subfields I looked at above. For example, TRR represented 25% of the pavement research and 15% of the congestion research.

Looking at trends over time, there are a few journals showing large increases in recent years, including the Journal of Transport and Health, which only started publishing in 2014. (Full disclosure: I’m on the editorial board.) The increase in Transportation Research Part F reflects the growing interest in the psychology of travel behavior. Overall, the diversification of publishing outlets is good to see, particularly as some university promotion and tenure committees question the value of TRR based on its impact factor. The diversification is a sign of a maturing subfield of research.

As for organizations where the research is being done, I’m happy to see Portland State University nearly at the top, just behind University of North Carolina. We’ll never beat UNC at basketball, but we’re certainly in striking distance to beat them at bicycle research. (Yes, Portland State’s mascot is the Viking.) Note, the organization is usually based on the lead author’s affiliation, so this does not account for collaborative research.

Where is the research being done? 41% of the articles came from the U.S., 9% from Canada, 8% from China, 7% from England, 6% each from Australia and the Netherlands and 4% from Germany. This compares to 50% of the “transportation” research from the U.S., indicating that bicycle research may be a bit more international. This makes sense, as the U.S. lags many countries in bike mode share.

Correction: An astute reader noticed that Susan Handy’s name sometimes included a middle initial and sometimes did not, which split her article count. Combined, she has authored 32 of the articles and tops the list. Having Susan at the top of the list makes perfect sense, knowing her work; I should have caught that. I have corrected the tables below.  There may be a few more examples of this, but appearing much further down the list. Perhaps a lesson for young scholars on consistent name use in publications, and one reason to use ORCID.

I was expecting to see John Pucher up top. He is tied for the lead, with Eva Heinen, when you look just at first author (second table below). Most of the names near the top are very familiar to me, and if you haven’t read their work, you should, including Meghan Winters at Simon Fraser University, Eva Heinen at University of Leeds, Rachel Aldred at University of Westminster, Susan Handy at UC Davis, Luis Miranda-Moreno at McGill, Ralph Buehler at Virginia Tech, Kevin Krizek at University of Colorado, and Kay Teschke at University of British Columbia. I did have to look up a few. BH Rowe has done a lot of injury research, including on helmets, often with BE Hagel as a co-author. ST Tin’s research focuses on bicycle crashes (#5 on the first author list). 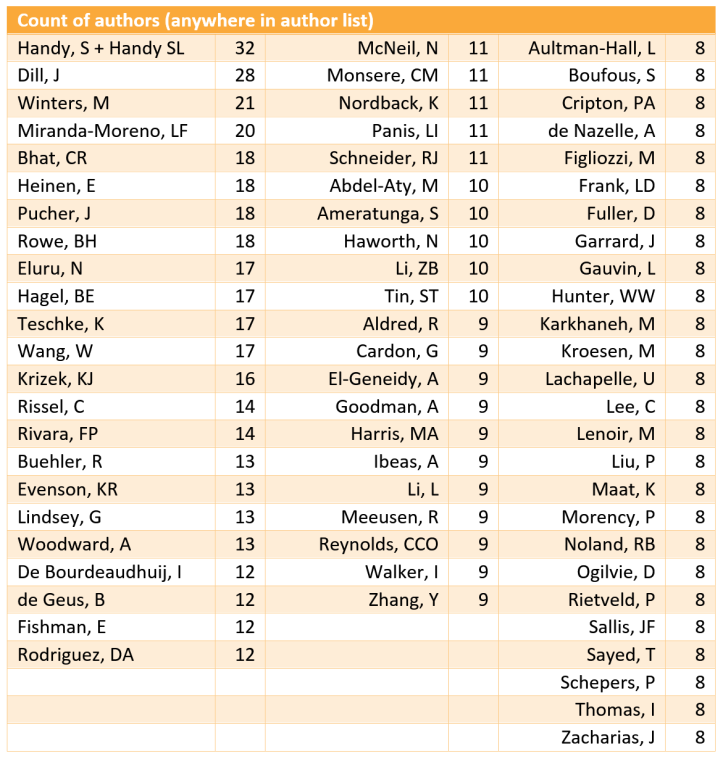 Citations are not a perfect measure of impact, but here goes

The most cited article (1,176 cites) is “The governance of global value chains” published in Review of International Political Economy in 2005, which used the bicycle industry as one of its case studies. After that, the articles are what I intended to capture – research about bicycling behavior, health, and safety. The top 25 are listed at the bottom of this post.

Aside from boosting my ego a bit, what does this all mean? I think it shows that the science of bicycling is in very good shape. (It also means that I am easily distracted from what I should be doing this weekend, to analyze geeky data.) When I wrote my first article on the topic (Dill & Carr, 2003) as a new, untenured assistant professor, I did ask myself if bicycle research was the right path to getting tenure. I wasn’t sure, and I developed other, complementary lines of research as well. But, I’m now a tenured full professor, and it’s the bicycle research that has led to a large chunk of my funded research, my most highly cited papers, being called by reporters, appointed to national committees, and, most importantly, the biggest impacts on practice. Transportation engineers and planners are eager to use good research in their work. Because a lot of my work is funded by the US DOT and other public agencies, the findings are usually available in reports, free-of-charge on-line, and not just in journals behind paywalls. So, it can reach the practitioner audience.

This is obviously a cursory analysis of the research. It would be interesting to do better comparisons to other fields, analysis of funding sources (that data field is poor in WoS), digging more into citations, etc. But, I need to leave it at this for now.

Most cited articles on bicycling from Web of Science (as of April 22, 2017)